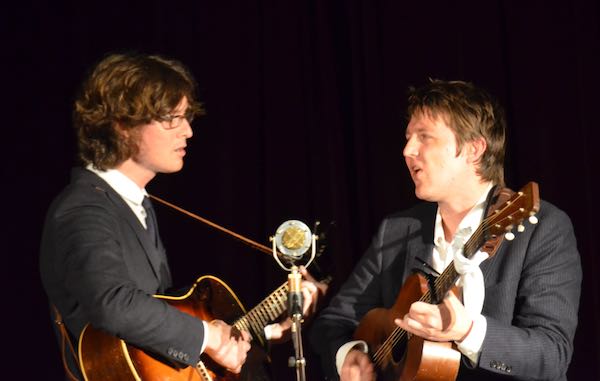 On this day in 2014, The Milk Carton Kids played their second sold-out night at
St. James Hall. One thing that stood out on this show was the massive hospitality list for the
green room, which was completely different but no less extensive / expensive than the previous
night's! Great singers, but I prefer to listen to them on CD. With no bus outside!

In 1998 one of my favourite songwriters, Tom Russell returned to The Wise Hall, along with the great guitar slinger Andrew Hardin  Russell is widely regarded as one of America's very best lyricists. A prolific and profound chronicler of the "soft underbelly of American society", the tales of life's perennial triers and underachievers. And the tales of immigrants and lost souls in the American west. Turn to page 3 of our June 1998 edition to read more about the return of "The Anti-Garth"!