On this day in 1988 at the WISE Hall we presented an Irish Session at The Railway Club (579 Dunsmuir St.) with the Sunday Umbrella Band featuring the likes of Daniel Lapp, Se Duggan, John Gothard, John Walsh, Michael Pratt, Tony Montague, and Joan Maybank. See page 2 of the May 1988 Rogue Folk Review for more details (if you use Safari and a Mac the PDF opens automatically. Firefox and PC users will need to open the PDF.)

In 1989, Seattle's remarkable blues and ragtime singer, humorist, and steel guitar eccentric Baby Gramps  began a two-night stand at The Railway Club, playing late into the night. His showpiece number was (and possibly still is) Palindromes, with incredible sentences strung together in a way that read the same backwards as forwards. For example "Doc note, I dissent, a fast never prevents a fatness. I diet on cod", "Rats live on no evil star", or "Live dirt up a side track carted is a putrid evil"! I don't know why they have stuck in my memory after all this time, but they have. The Vaudeville era is still alive and plunking with Baby Gramps and his steel guitar, that he likes to call "Lap Pal"! For more info on this show click here to open the PDF of the Rogue Folk Review and scroll down to page 2.

In 1991 there was a Local Folk Night at the WISE Lounge with Jim Houston as the featured performer. See the May 1991 issue (page 2).

In 1992 I had called the brilliant Irish fiddler, Kevin Burke, at his home in Portland to see if he would like to come to perform at The Rogue Anniversary Party. "Ooh, we like parties!" he said. So indeed they came on this day 28 years ago. This was just before the release of the first album by Kevin Burke's Open House, which also featured Mark Graham on clarinet and harmonica, Paul Kotapish on mandolin and guitar, and the superb percussive dancer Sandy Silva. What a memorable show that was!!

On this day in 1993, James Keelaghan once again brought a new band and a brand new CD - his 3rd -  My Skies. In the band were Hugh McMillan (SOTW) on Chapman stick and octave mandolin, Hugh's then-wife Colleen Eccleston on guitar and vocals, Brent Gubbels on bass, and The Stoaters' Doug Schmidt (accordion). The opening act was the brilliant 12-string guitarist and songwriter from Seattle - Sam Weis - who in 1988 had become our first ever performer at The WISE Hall.

May 7th 1996 afforded us the chance to bring one of the most revered bands in Celtic music to Vancouver for the first and only time - Patrick Street - at the Scottish Cultural Centre in Marpole. The quartet starring Kevin Burke, Andy Irvine and Jackie Daly had just released their fifth CD, Corner Boys, and the first since Ged Foley had replaced Arty McGlynn - who sadly passed away just a few weeks ago - on guitar. The band that first brought Music For A Found Harmonium into the realm of Irish music had finally made it to town! (That tune has been the opening track on my radio show since 1989!) You can read all about the band in our May 1996 issue.

On this day in 1999 we presented the BC debut of a fine young Scottish trad trio called Tabache at The Wise Hall. Claire Mann and Aidan O'Rourke in this excellent young band. They have all moved on to other projects since, so here was another example of The Rogue being on the cutting edge of the Celtic and folk music scene! Full details of our show can be found here.

In 2003, Ray Bonneville, a great bluesy / rootsy guitarist and songwriter with a slow-hand style and a smokey voice, who divided his time between Quebec and Arkansas, made his second appearance at The Rogue. Now he lives in Austin. Details of this show can be found right here. Scroll on down to page 2 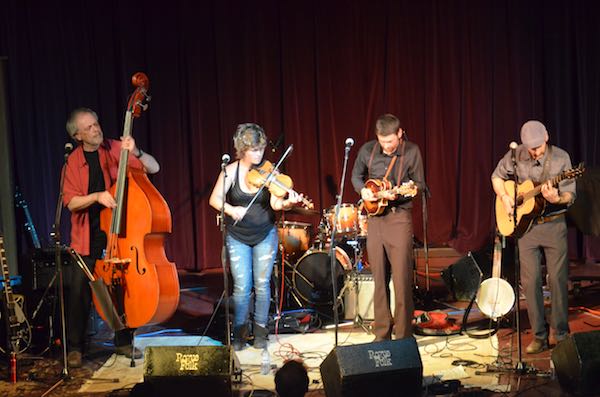 Most recently, on this date in 2015, we presented a double bill of BC's
newgrass / gypsy jazz / swing quartet Rakish Angles (above) and Winnipeg's folk / pop
darlings Sweet Alibi (below). Neither band boasts a huge following, but I thoroughly enjoyed
this concert. Lovely people, every one of 'em! 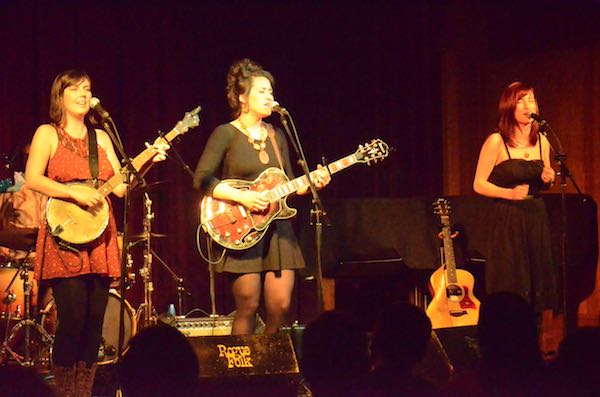