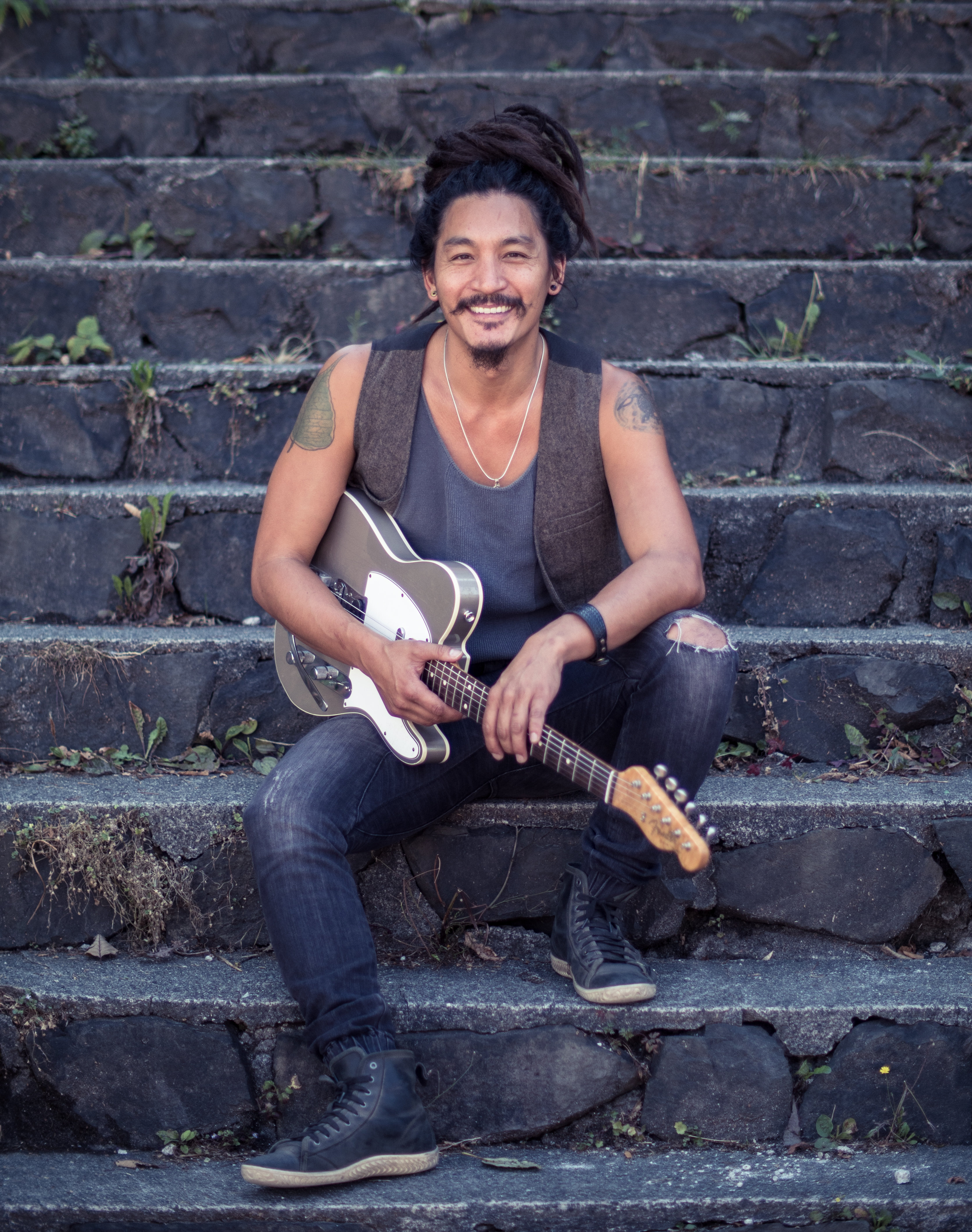 Rick Buckman Coe is a Vancouver singer songwriter with a stunning vocal range and strong roots in Hawaiian music, reggae, and social activism. His only previous appearance at The Rogue was at The Acoustic Guitar Project in December 2015, when he shared the bill with Shari Ulrich, Lydia Hol, Wes Mackey, and Itamar Ehrez. It was a memorable show, and Rick's remarkable voice made a lasting impression on all who were there.

He has just released his 5th CD, Altar, and this concert is the official CD launch in Vancouver. His music has always had a focus on the kinder potentials of humanity while addressing social and environmental issues, along with a healthy dose of love songs. This album is a return to his folk and acoustic roots. It is grounded in experiences and love for the Pacific Northwest, and is lushly arranged with hollow-bodied instruments making a sonic bed for soulful melodies and lyrics to grow from. All the ingredients of the album will be present at this evening celebration: upright bass, cello, viola, acoustic guitar, banjo, lap steel, piano, and organ from some of Vancouver’s best veteran musicians.

We urge you to come along and check out one of B.C.'s finest young singers. You will be amazed! You can also have a listen to the new CD here.

Tickets will be available at the door, and can also be purchased online and at Highlife Records, and Tapestry Music.
2. Madison Violet, Saturday April 14th, 8pm, at St. James Hall (3214 W.10th Ave.) 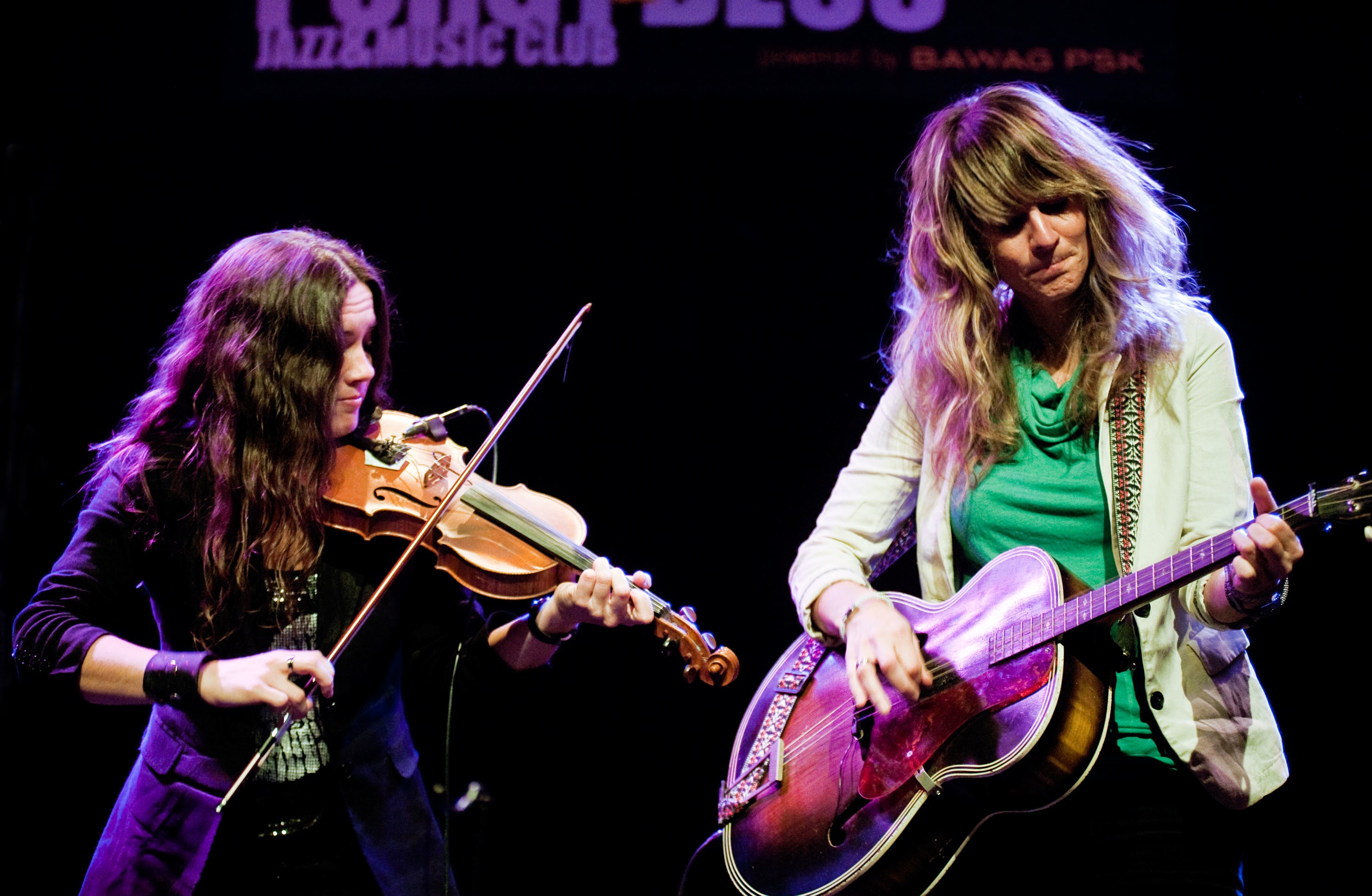 Madison Violet is the collective name for Brenley MacEachern and Lisa MacIsaac, who have now made 6 albums together, and, after taking some time off the road, they are back with a new CD - The Knight Sessions. The album features 5 new songs and 5 songs from their debut CD, re-recorded in a stripped-down, acoustic form. The two singers share common roots in Cape Breton, and their families both originated on the Isle of Eigg off the west coast of Scotland. They could have been born to sing together. Maybe their ancestors sang together for hundreds of years. Who knows? Their harmonies are sublime, and the emotion and symbiosis they pack into their uniquely Canadian folk-pop songs is very moving. Last year we saw them at Folk Alliance, and were delighted to hear how great they still sound. It's been 8 years since their only previous Rogue show, but ticket sales are good, so why not book now and come and check out this wonderful duo in concert in the cosy surroundings of St. James Hall? 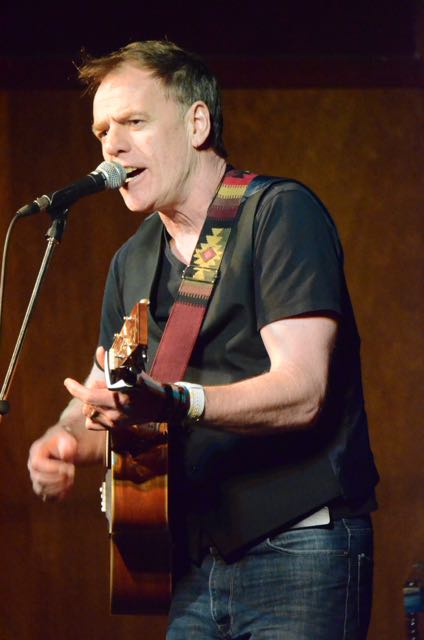 Welsh singer / songwriter Martyn Joseph is one of the most defiantly optimistic voices in music today. His passion for music is almost as palpable as the incredible commitment he makes to help the under-represented, wherever they may be. Social justice and human rights are paramount in his songs, and he delivers them with such unbridled emotion and power that one can't help but be swept along in joining the cause! This show will sell out, so don't delay. Get your tickets while they last. 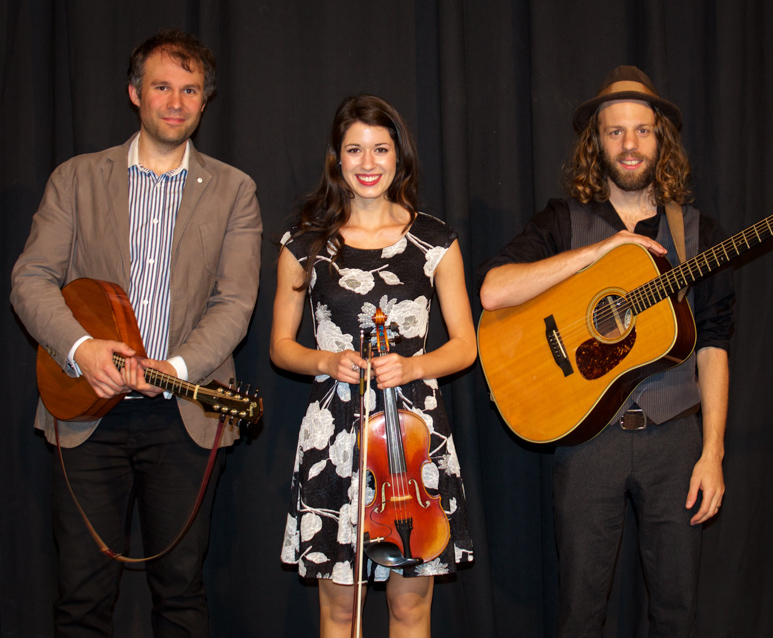 This mercurial young fiddler from White Rock cites Co. Clare's Martin Hayes as one of her main inspirations. The feeling is mutual, too. Martin is a big fan. She has written hundreds of tunes, achieved an impressive array of academic and musical awards, and never ceases to amaze me with her brilliant and imaginative musicianship. Her latest CD, Strong Bow, was produced by the incredible multi-instrumentalist Adrian Dolan (The Bills.) He and guitar wizard Adam Dobres accompanied Kierah on her last appearance at The Rogue last year, and they will be back - along with brilliant percussionist Robin Layne (The Paperboys, Locarno, Mazacote, etc.) This show is strongly recommended for all fans of Celtic music. Click here for tickets and information. 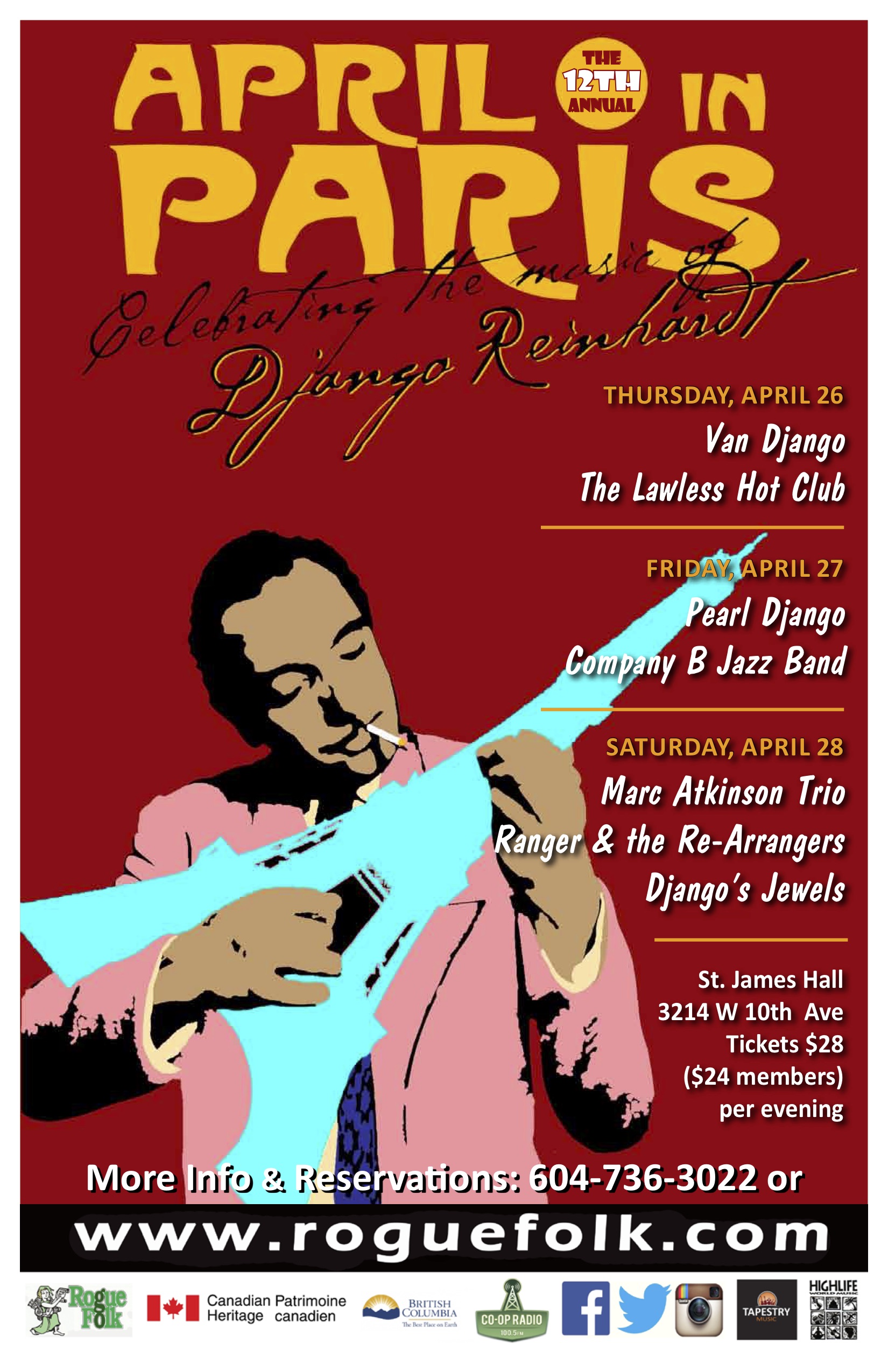 Our 12th annual celebration of the musical legacy of Django Reinhardt and Stephane Grappelli features three stalwart local gypsy jazz combos who have starred at most - if not all - the previous editions of this fun event. Perennial Rogue faves Van Django will perform on the opening night, and they will have a brand new CD available for the first time at this show. Opening for them is a new Vancouver band, The Lawless Hot Club, which features Michael Dunn and Don Ogilvie on guitars, and there will be a unique re-creation - by Cam Wilson (Van Django) and Edgar Bridwell (Lawless Hot Club) - of a classical / jazz collaboration made famous by Grappelli way back in the heyday of the Hot Club of France era of the 1930s.

The following evening, Company B Jazz Band will unveil their new recording The Bee Sides and will wow us with their gorgeous harmonies and fabulous playing. Sharing the bill is Seattle's Pearl Django, who last played April In Paris in 2010. They now have some new players and a great newish CD, With Friends Like These (2017).

It's going to be fantastic! Full details and tickets can be found here.

6. Radio Waves
This week's new releases include Calexico, Irish band Lankum (formerly known as Lynched), Canadians Kacy & Clayton, David Vest, Mark Perry, and Jolie Holland & Samantha Parton, and many more. Plus a look ahead at Rogue events - and others, including Kim Beggs who will be at the next Songbird North at The Roundhouse on April 24th. I hope you can join me this - and every - Saturday from 8am to noon on CiTR fm 101.9 and www.citr.ca

These tickets are only available until Thursday May 10th.  Members can purchase as many tickets as you like for your friends and family!

They can be purchased in person at any of our concerts up to and including the Laura Smith concert on May 10th, or next Tuesday's Roguelele Night, or the May 2nd Contra Dance.

Or you can mail a cheque - payable to Rogue Folk Club - for the appropriate amount to: Rogue Folk Club,
#208 - 1504 Duranleau Street,
Vancouver BC
V6H 3S4 Or you can pay in person at that address, but call 604-732-1305 first to make sure there is someone there to take your order! We accept cash, cheque, or Debit. No credit cards. Sorry. You must be a fully paid up member of the Rogue, and your membership must be valid up to - or beyond - Sunday July 15th, 2018. If you're not sure, we can look up your membership records on our database when you make your purchase. Or just add $30 for an individual membership or $50 for a family membership to your order, and we will extend your membership by 12 months from the current expiry date (or date of receipt, whichever is greater.)

We will make the tickets available for pickup at any of our concerts after May 11th, or at our office. It is up to you to arrange to collect them from us. We will not have them at the festival gate for you.Remember, the deadline is earlier this year. Thursday May 10th.
Next week we will announce an even better deal for the Mission Folk Festival (July 20 - 22nd)