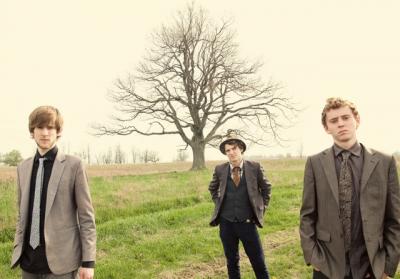 The Abrams Brothers (ON)

way too young to be playing that good – Arlo Guthrie

With the release of Northern Redemption, The Abrams Brothers - John, James and cousin Elijah - make a transition from the music of their roots to their own distinct sound. It's a combination of bluegrass, country and folk-rock that's had the Canadian festival circuit up in arms over their potential, and the rest are sure to catch on.

The Abrams Brothers are fourth-generation musicians and, despite their age, veteran is certainly not a word out of reach given their credits. They've been touring together for almost a decade - and in the past few years, have become Canadian festival favorites. In 2005, the Ontario-based group became the youngest Canadians to appear on Nashville's iconic Grand Ole Opry. They've toured Europe, and several times have performed for the Jacob's Ladder Folk Festival in Israel. In 2006, the band received the Daniel Pearl Memorial violin, given to especially gifted young musicians.

Released on June 21, 2011 in Canada via United For Opportunity/Fontana North, Northern Redemption is the fourth release from The Abrams Brothers. The nine-track album was produced by Canadian singer-songwriter/producer Chris Brown (The Bourbon Tabernacle Choir, Tony Scherr, Ani DiFranco, The Barenaked Ladies). Northern Redemption is an album of love gained and lost and one about getting out and moving on. Yes, The Abrams Brothers have grown up and truly shine as young men on this one - young men with a taste of life whose insecurities fall second to a passion to make their own destiny.

When Oh Susanna first dreamed of making music, she wanted to create songs that would stand the test of time - just like the Stephen Foster classic from which she takes her name. With the release of her sixth album, SOON THE BIRDS, she has again achieved this dream with a collection of enduring songs that resonate deeper and deeper upon each listen. Her voice, always a marvel, is a haunting, expressive instrument that she uses to stunning effect.