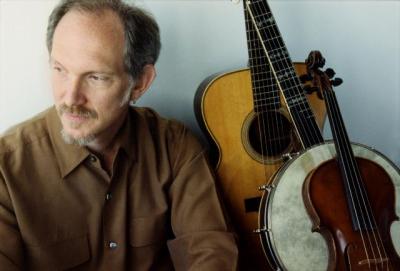 Alone or with fellow musicians; guitar, fiddle, or banjo in hand, Bruce Molsky has been exploring traditional music from an astonishingly broad range of cultures over the past two decades - synthesizing them and refracting them through his own evolving sensibilities to the point where the sources of his inspiration transform themselves into a sound that is uniquely his. While most identified with traditional American old-time music, Molsky's influences range from the Appalachian soul of Tommy Jarrell to Delta blues; from the haunting modal strains of Irish music to the rhythmically nimble music of Eastern Europe. A member of the Celtic / Balkan / Americana supergroup Mozaik, he is one of the most celebrated and in-demand acoustic musicians on the planet!

Bruce Molsky is an utterly convincing "Appalachian" fiddler & banjo-picker, who comes from the Bronx in New York City. He's many other things too - among them, a phenomenal fingerpicking guitar soloist, across genres ranging from Nordic through West African to country-blues. As a singer too, he just "has it" - an uncanny, seemingly low-key, warm, unassuming knack for expressing a song's essence. "contented must be" is written in the lower case, but Bruce's new CD is capital-"e" excellent. Equally wonderful in its haunting & its exuberant moments, it's the work of a highly individual & sometimes quite novel "old-timey" musician. — Australia Radio National