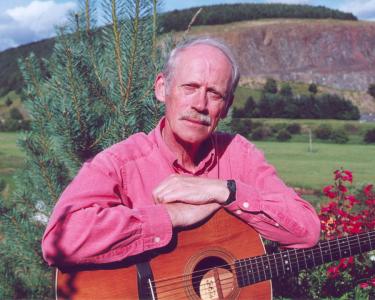 Archie Fisher is a Scots folk singer who was born into a musical family and he originally sang in skiffle groups in the 1950s. Gravitating towards traditional folk and then his own songwriting he formed a music club in Edinburgh, The Howff, and helped launch the career of such stars as The Incredible String Band and Barbara Dickson.

Some of his compositions, notably Witch Of The Westmoreland and Dark Eyed Molly, found their way into the repertoires of Fairport Convention and Stan Rogers but he went out of the limelight for a while before launching a long-running show on BBC Radio Scotland called Travelling Folk in 1983. A few years later he recorded a live album with Garnet Rogers - Off The Map - and Garnet produced his next record: Sunsets I've Galloped Into.

Archie concentrated on his radio show and sporadic concerts in the U.K. for many years after that, but has now returned to touring. He's played at The Rogue three times (with Garnet in 2001, solo in 2002 and with the late, lamented Raylene Rankin in 2005) and we are very pleased to be able to welcome him back!

Local Celtic band Ballyhooley is a dynamic group of musicians in love with the Irish musical tradition. Playing nine different instruments among them, the band members delight in creative arrangements representing the many moods of Irish music which is variously raucous, stirring and hauntingly melodic. The members of Ballyhooley met in local sessions around town, where a tiny but passionate Irish music community thrives half a world away from Ireland.

Ballyhooley is: Vanessa Kay - fiddle, mandolin, guitar and vocals. Tim Fanning - uilleann pipes, flute, whistles and vocals. Glenn Buholzer - guitar, bouzouki, mandolin and vocals. We would love it if they could accompany Archie on his memorable song couplet Witch Of The Westmoreland and The Return.