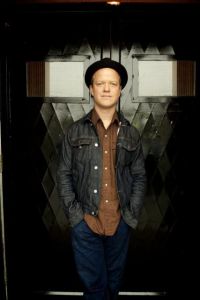 Over the past decade or so Steve Dawson has become such an indelible fixture on the Canadian musical landscape that it’s tempting to take him for granted. One of the drawbacks of being so talented is that Dawson makes everything he does sound so effortless. The music that continually flows out of him is so natural and unforced that it’s possible to forget all of the toil that went into producing it. Behind the organic, flowing guitar work, the crisp arrangements and the laconic singing voice, resides one of the brightest, hardest working musicians the country has ever produced.

In addition to working on his own music, he’s kept very busy producing memorable albums by such luminaries as Jim Byrnes, Kelly Joe Phelps, Old Man Luedecke, The Sojourners, and The Deep Dark Woods, as well as bringing the award winning Mississippi Sheiks Tribute Project to fruition (featuring Steve’s work with Madeleine Peyroux, Bruce Cockburn, John Hammond, and many more). Add to that his session work and touring commitments and it’s amazing that this 2-time Juno award winning artist (not to mention 5 other Junos for his production work!) ever finds the time to create any new work under his own name.

Sometimes it’s best to just put up a microphone in a room, sit down and play your guitar… This is the record that Steve Dawson’s growing number of fans have been waiting for.

Rattlesnake Cage finally gives them the opportunity to hear Steve interact with his guitar in a way that has never been captured on record before. Until now, hearing the sweet melodies and deep soul of Steve playing solo guitar has been a treat reserved for live audiences in intimate settings. These new simple and unadorned recordings hearken back to the ‘American Primitive’ sound that John Fahey and other artists such as Peter Lang and Leo Kottke recorded on Fahey’s iconic Takoma record label in the sixties – instrumental music informed by the deep traditions of blues, ragtime, jazz and even Hawaiian music, but taking those influences in unexpected directions. The opening track, ‘Blind Thomas at the Crime Scene’ which takes its title from Fahey’s earliest nom de plume is the recording that most clearly communicates Dawson’s respect for the American Primitive aesthetic, and gives the listener the clearest indication of what’s to come.

Recorded with a single vintage tube microphone that had recently been rescued from decades of hanging from the ceiling rafters of an old theatre in Detroit, you can hear every detail and nuance of each note. The effect of hearing a recording this open and pure is quite astounding.

Steve will be joined by Keith Lowe on bass for this evening.