with the Sojourners and guests 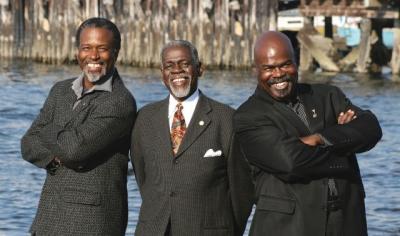 THE QUEEN OF DIAMONDS

UPDATED INFORMATION: The Queen of Diamonds will be moored behind the Edgewater Casino at the Plaza of Nations in False Creek. She sets sail at 11am and cruisers need to arrive between 10am and 10:30am. Ticket price includes the cruise, barbeque and music.

The Sojourners host a revival tent-flavoured cruise aboard the Queen of Diamonds as she sails around Stanley Park and out into English Bay. Confirmed guests include Kenny "Blues Boss" Wayne, Candus Churchill, The Gospel Experience, Jim Byrnes, and several surprises. All backed by a pair of house bands featuring Paul Pigat, Bill Runge, Russell Jackson, Chris Nordquist and Jesse Cahill.

The Sojourners began when Canadian blues icon Jim Byrnes called Vancouver-based gospel singer Marcus Mosely on the phone a few years ago to ask if he could round up a few friends to record some back up vocals for a new album. From the moment Mosely and his pals, Will Sanders and Ron Small stepped up to the microphone and began singing, they realized that they had something very special going on. When Byrnes dubbed the trio The Sojourners the name stuck and - as they say - the rest is history.