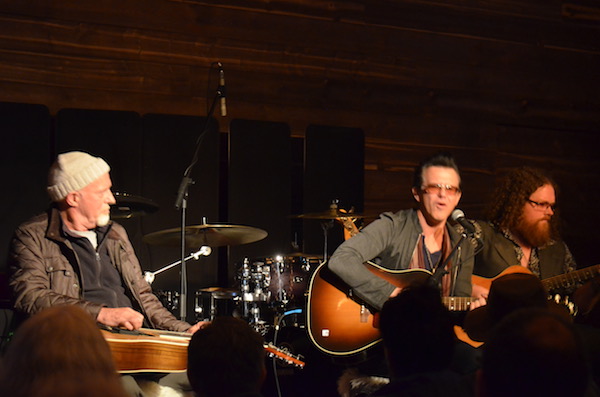 I wrote this late on Thursday evening, sitting in a log cabin on Saltspring Island, listening to the rain on the roof and enjoying the warmth of a log fire. We'd just returned from Pitchfork Social, Saltspring's finest roots music venue. Mike Farris was the star of their final concert of the Summer. He played with his band, and also performed a few songs with local hero Harry Manx. Very cool!

Actually it was quite cold, and very wet. The venue is in a barn, with open sides, so a bit nippy. Great kitchen there, and good beer at the mobile beer truck - served in mason jars.

It was an excellent concert, not nearly as intimate and wondrous as Mike's gig on Wednesday at The Rogue, though. What a show that was! He and Paul Pigat delivered an astonishing concert. Soul music par excellence! One of our most rewarding concert experiences EVER, I reckon.

On Thursday morning we'd picked up Mike and his wife Julie from their downtown hotel and we drove to the ferry. Booked the Thru Fare to Fulford Harbour and delivered them to The Tree House for late lunch - having first checked them into their wonderful home for the night - The Cottages at Bullock Lake, north of Ganges. For the first time I can recall, I saw orcas from the ferry. We had just left Active Pass, and there were three or four orcas off Pender Island. Just another magical day here in paradise, I guess!

We have a spectacular band playing gypsy jazz this Sunday evening. Quinn Bachand is a guitar prodigy from Victoria. Still in his very early 20s he has over a decade of professional tours and recordings under his belt! He's recorded two CDs with his sister, Qristina, toured for years as Cape Breton's fiddle demon Ashley MacIsaac's accompanist, won a scholarship to the prestigious Berklee College of Music in Boston, toured with the Rhythm Future Quartet, and made two albums with his gypsy jazz band Brishen.

Brishen is a Romany word for "storm bringer", and Quinn certainly serves up a storm on the guitar - and fiddle - in this band. They played a Rogue gig in October 2013 to mark the release of their debut CD, and are heading to Vancouver on the back of a series of strong performances at Whidbey Island's Djangofest NW this past week. 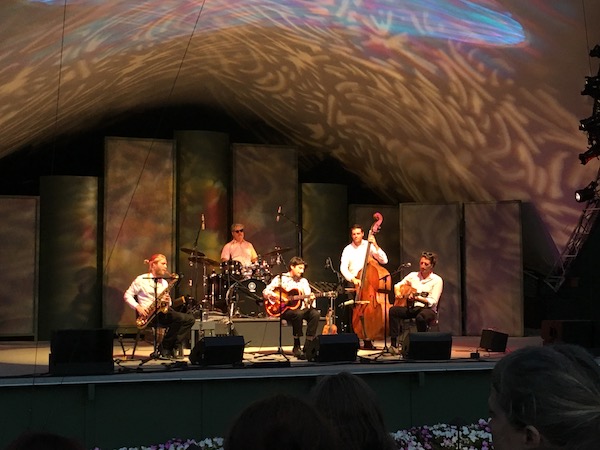 We had the pleasure of seeing them perform at Butchart Gardens last month. What a show! Quinn mostly plays guitar, but also adds a few tunes on fiddle, and banjo. He's backed by rhythm guitarist / singer Reuben Wier, Greg Feingold on upright bass, and Eric Vanderbilt-Mathews on saxophone and clarinet (it's worth seeing the band just to hear his mastery of the reeds! Add this to Quinn's devastating skills, and the band's thorough knowledge and expertise in all kinds of swing and gypsy jazz, and you are guaranteed a great night out!)

This show is sponsored by Gerry Hamer, a loyal Rogue Folk Club member, who has been coming to our shows for many many years, with gypsy jazz being a particular favourite genre. Thanks, Gerry!!

Sponsorship opportunities are available for all our shows - and they make a huge difference to our ability to continue to present such fine concerts. If you, or your employer, or someone you know would like to sponsor a show featuring one of your favourite bands, please contact Morris Biddle, Rogue Folk Board Member, mobiddley@me.com

So, I hope you can make it tonight! Be prepared to be wowed with sizzling hot, world-class Gypsy Jazz and Swing music performed with incredible virtuosity and soul.