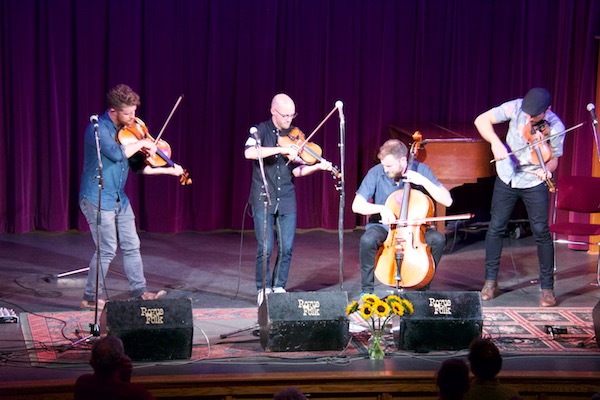 What a fantastic run of concerts - and weather - we've had so far this month! If you came to any or all of the last few shows you'll know what I mean! I think performers like Guy Davis & Fabrizio Poggi, Galway's We Banjo 3, Nashville singer Claire Lynch & her great Canadian band, The Fretless (above), and their opener Rachel Beck were all outstanding! Add to that September's Rogue performers like Raine Hamilton, Lonesome Town Painters, Brishen, and Mo Kenney making superlative Rogue debuts, and Newfoundland's Fortunate Ones packing the house and I reckon we've witnessed some incredible shows. Thanks for your support!! The "hits" keep on coming, too. Hope to see you at St. James Hall this weekend:  2. The East Pointers, Friday October 19th, 8pm, St. James Hall (3214 West 10th Avenue) 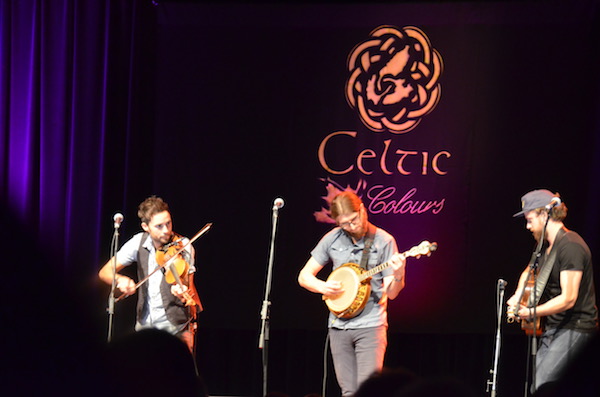 On a visit to Melbourne a few years ago I was asked by a couple of DJ friends what I knew about the Canadian band, The East Pointers. I had to admit I'd never heard of them. Then I heard their demo CD and was quite impressed. A few months later I saw them at Celtic Colours in Cape Breton (see above photo I took there in October 2015). They were WAY more impressive at that show, with their first full-length CD, Secret Victory, rapidly becoming a favourite choice in the car and on my radio show. A few weeks ago they released What We Leave Behind, another brilliant album with powerful original songs and stunning Celtic medleys. This will be their Rogue debut, and we've been asked to leave some room for dancing! They are tons of fun, and exemplary musicians. Don't miss out! For tickets and information, click here  3. Matthew Byrne, Sunday October 21st, 8pm, St. James Hall (3214 West 10th Avenue) 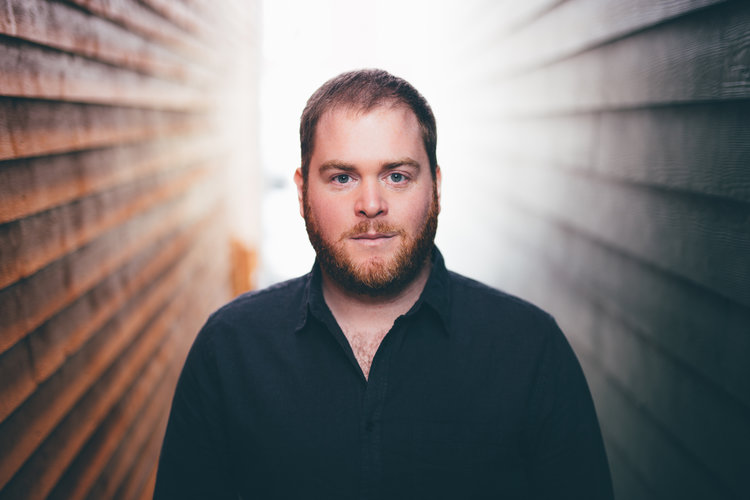 Canada's finest trad. singer returns! Young Newfoundland singer Matthew Byrne is a wonderful songwriter and musician. He's also a member of the band The Dardanelles, along with CBC Q host, Tom Power, but is mainly known for his solo work these days. Matthew will present songs from his three excellent solo releases Ballads, Hearts and Heroes, and last year’s Horizon Lines. Steeped in the brine of maritime folk from an early age, Byrne presents a mix of material from around the Anglo-Celtic diaspora and contemporary songs in the trad vein. Opening for him will be the brilliant young fiddler Michael Burnyeat from Vancouver. He played a few tunes in the lobby at The Chan Centre the other week - before the concert of I'm With Her. "Aye, aye," I thought. "Time to bring this young man to the Rogue stage!" Tickets and more information available here  4. Irish Mythen, Thursday October 26th, 8pm, St. James Hall (3214 West 10th Avenue) 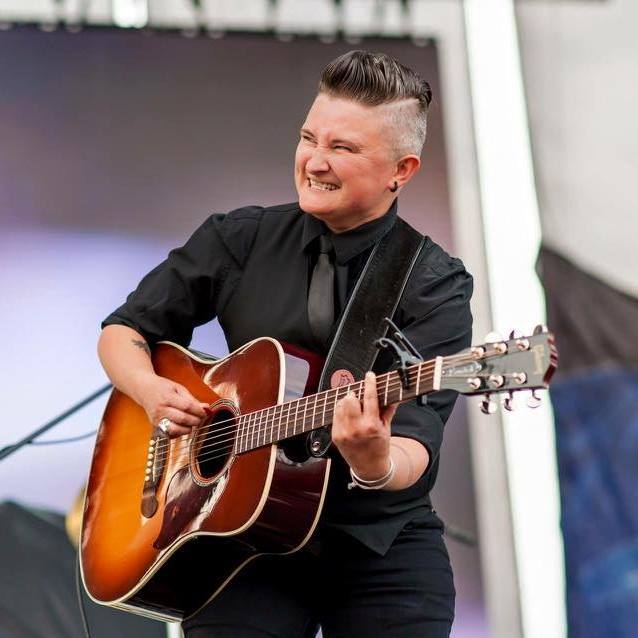 Once you hear this woman sing you will be knocked out by the sheer power of her delivery. Born and raised in Ireland, and now living in PEI, she writes most of the songs herself, but it was her rendition of Dominic Behan's The Auld Triangle that really blew my mind when I saw her at the Edmonton Folk festival last year.

I couldn't do justice to her in my own words quite so well as my friend Lisa Schwartz - Artistic / Executive Director of the Philadelphia Folk Festival does: "I had no idea what to expect when this five-foot-nothing lady took the stage, all smiles and twinkling eyes and guitar. Then, she opened her mouth and out flew a voice that came straight from the Heavens with all the power and the glory and the truth of someone destined to be a singer. I’ve been blessed with seeing and hearing a lot of talented musicians in my life, but I have never experienced anyone quite like Irish Mythen. She is a force of nature and a gift from The Almighty Herself."For tickets and more info, click here

5. November At The Rogue: The Once, TriVo & Fraser Union, Early Spirit, Martin Kerr, Small Glories, and an All Star Tribute to The Beatles' White Album 50th Anniversary. 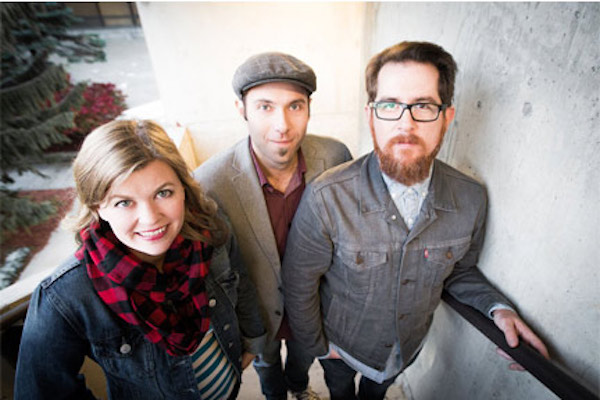 Newfoundland trio The Once make their Rogue debut on November 2nd. Such wonderful vocal harmonies! This show is Sold Out online, but there may be a few tickets left at The Rogue tonight or at Highlife Records or Tapestry Music on Broadway.

On Sunday 4th we are helping The East Van GoGos raise money for the Stephen Lewis Foundation with a concert at St. James to benefit African grandmothers (gogos) who are raising their grandchildren, cos the kids' parents have died of AIDS. We have two great bands: TriVo (Dawn Pemberton, Karla Mundy & Brian Tate) and Fraser Union, and there will be tasty home made treats and the Loonie Draw (bring some $1 coins!) There are no discounts or Parcels available for this show, since it is a fundraiser for this extremely worthy cause. Note the early start: 7:30pmFriday November 9th sees the launch of "Unrelated", the debut CD by Vancouver Celtic / Jazz quartet Early Spirit, featuring young fiddle demon Gabriel Dubreuil and singer / guitarist Jay Knutson - a founding member of Spirit of the West. The following night, Edmonton's Martin Kerr makes his Rogue debut at St. James. This young Englishman moved to Alberta a few years ago and his brilliant songs and wonderful stories were a big hit at the Vancouver Folk Music Festival in July. 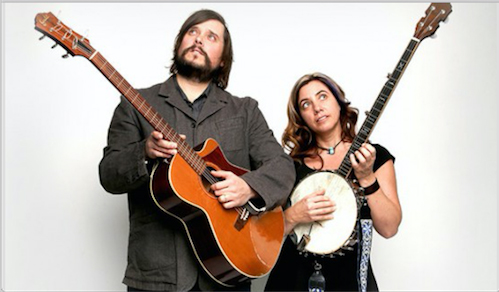 Winnipeg duo The Small Glories (Cara Luft and JD Edwards) return to town on Friday November 16th with - we hope - a new CD, and fresh from what seems to me to have been a mammoth tour around the globe, and which saw them in stellar form at the Mission Folk Festival this Summer. Cara was a founding member of The Wailin Jennys, and her music was influenced early on by everything from Steeleye Span to Led Zeppelin & Bert Jansch. Together they make wonderfully harmonious music, carrying on the spirit of great songwriters and activists like Woody Guthrie. Opening for them will be Norah Rendell & The Lost Forty. Norah was raised on Bowen Island and formed the fine band Cleia, with Karla and Keona Mundy, in the early 2000s. She later relocated to Minneapolis and married Brian Miller, and was a member of the Celtic quintet The Outside Track for a few years. This wonderful singer and flautist returns with Brian, and Randy Gosa to share the bill with Cara & JD. Should be a great night!On November 22nd 1968 The Beatles released their double LP opus, now known as "The White Album". 50 years on, The Rogue is delighted to co-present a spectacular tribute to this recording! The evening will showcase innovative interpretative arrangements of all 29 songs from that album, featuring a core band of some of Vancouver's funkiest musicians including Bill Coon, John Korsrud, Ed Henderson, Allen Stiles, Ron Samworth, Sandy Fiddes and Cam Wilson backing up vocalists Kate Hammett-Vaughn, Andy Hillhouse, LJ Mounteney, Marin Patenaude, Steve Maddock, Duncan Bain, Moshe Denburg, Dave Gibbons and more! This is a gala benefit concert for PAL Vancouver (The Performing Arts Lodge provides longstanding members of Vancouver’s performing arts professions affordable housing within a vibrant and creative community setting.) The album will be performed in its entirety and in its original order. The show will start at 7:30pm on November 22nd.

6. Radio WavesOn this week's edition of The Saturday Edge On Folk I'll have new releases by the likes of Bokante, Yves Lambert Trio, Imar, Kaia Kater, Early Spirit, Rura, Kat Danser, Maria Muldaur, and many more. Plus features on all upcoming Rogues, and a few surprises too. I hope you can tune me in and turn me on this and every Saturday from 8am to noon on CiTR fm 101.9 and www.citr.ca (where you can also find podcasts of ALL my shows, dating back well over a decade! If that's the sort of thing that floats your boat...)  7. TV Waves!Yes! The Rogue goes multimedia!! This weekend!! The East Pointers concert will be filmed by our good friends at Hubcast Media for later broadcast on a new show on JoyTV (Telus TV channel 123 in Vancouver) called On Stage. It's a 30 minute show hosted by Vancouver TV personality Fiona Forbes, and is aired at midnight on Saturday. 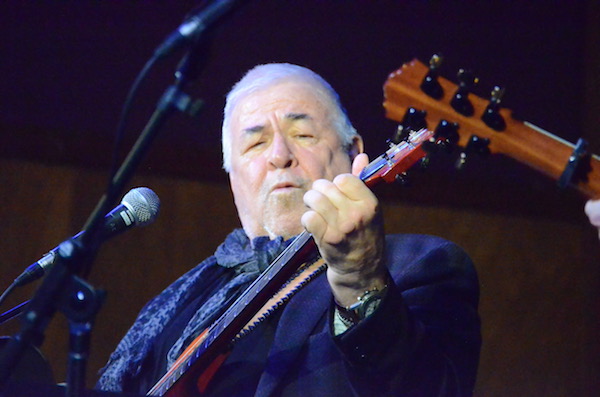 Tune in this Saturday October 20th to see four songs from the Jim Byrnes CD release concert which Hubcast filmed in January - plus an interview with Jim which I recorded on stage at the hall last week! You can also access the shows online at onstagelive.tv - where you can also opt to buy more of the concert for a small fee.  8. Other Shows Around Town At last weekend's wonderful Steve Dawson-Matt Andersen-Roy Forbes tribute to Joe Cocker's Mad Dogs & Englishmen LP at the Kay Meek Theatre in West Van I was delighted to discover that Ruthie Foster will perform there on October 26th. On Sunday October 28th PEI songwriter Lennie Gallant plays the Blueshore Financial Stage at Capilano University.On November 3rd Nigerian-born singer Tayo Aluko performs his stunning one-man musical play Call Mr. Robeson at the St. James Anglican Church (303 E. Cordova)Kacy & Clayton, psychedelic folk duo from SK, who remind me of early Fairport / Jefferson Airplane, open for Deep Dark Woods at The Biltmore on November 15thBacio Rosso is a dinner theatre cabaret circus extravaganza which takes place in a Spiegeltent in Queen Elizabeth Park from November 1st to December 31st. Spiegeltents are amazing! It's worth going just to experience the inside of one! There are very few of them still in existence. Most are in Europe. They are a Belgian innovation from the early 1900s, a travelling roadshow which forms a sort of circular scale model of The Commodore Ballroom, replete with red velvet drapes, glittering mirrors, polished wooden booths, a dance floor, and a stained glass clerestory. All under a canvas roof, festooned with plush curtains and sparkling lights.  9. Thanks for reading this far!!There is a lot going on! We just got back from seeing First Man. Quite good, I thought, but there were a lot of scenes from space modules about to break apart, and the music kept wanting to morph into Pink Floyd (Welcome to the Machine) or David Bowie (Space Oddity) or the Blue Danube (from 2001) or JM Jarre's Oxygene - but didn't! See you at The Rogue where the music always reaches its proper goals, and the seats don't shake uncontrollably (mind you, since legalization, who knows? No, we are NOT selling THAT stuff. To continue with the '70s motif, Dave is most definitely not here!)